The creation of the initial range plan reflects the quantities that have to be bought at item level by colour, in the correct size ranges, at the target mark-ups and retail selling prices. It is essential that the monetary buying amounts of the plan are aligned to the merchandise  plan intake values.
The buying plan should reflect the strategy which guarantees the correct amount of selection within the stock parameters while still providing the right spread of products in the required quantities that will best serve the target customer in both style, form and function at any point in time of the season.
During the construction of the plan, the principle that needs to be adhered to is that the merchandise plan must guide the buy with the customer top of mind. Lessons learnt from previous seasons need to be analysed and equally applied to both the basic continuity lines as well as the high end fashion products. Fundamentally it is also important to get the right balance of the correct number of choices in quantities that enable the guarantee of basic lines in depth without impeding the introduction of newness.
It happens often that too much emphasis is placed on the fringe or peripheral lines, or there is excessive similarity in characteristics and price offerings that can disrupt the balance. The emotional wishes of the buying team and suppliers can also have an influence on a distorted balance being achieved and should be guarded against.
The range plan which represents the assortment of products developed within specific categories must represent the organisation of the business and therefore should be balanced across the width and depth of the structure.
The width represents how broad the choice of product is while the depth represents the quantities required to cover the number of sizes and colours including the amount of price points within the product categories. It is probably easier for niche retailers that focus on a narrower customer segment of the market to best be able to serve the both the depth and width demands of their market.
The difficulties that retailers are faced with in striking the right balance of width and depth of ranges is that of presenting real customer choice while at same time optimising the return on investment. In other words, there is the need to attract customers by maintaining a level of newness and fashionability without compromising the traditional or core customers and especially the high volume sellers. It is therefore critical that the buyer has a clear vision of the marketing position and understands the target customer though continuous research which provides the confidence to determine as to what should or should not be kept in the range.
The other challenge of having a too broad choice of styles is that the decision making process becomes an effort to select a product and diminishes the pleasure of the shopping experience.

The volume and choice balance emphasis that the customer expects to find new styles in their size in a variety of colours can be illustrated as follows. 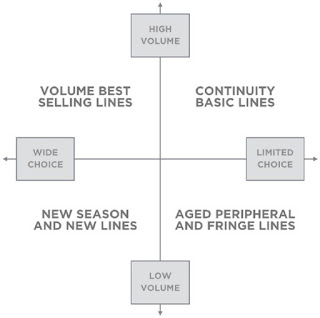 The difference between Trends, Insights and Fads is clarified


Trends and insights indicate as to where your brand currently is and ideally where it should be. They are used to guide your decision making and help in the formulation of the strategy until the whole picture evolves.
The trend can be best described as the general direction such as consumer buying behaviour is developing and is changing, it therefore has no beginning and has no end as it provides indicators in the development of the brand.
Trends are driven by attributes such as a specific look, a lifestyle, a colour, fabric, style, a shape or innovation. It is crucial that a trend is accepted by the target customer in that they need to understand and embrace the trend as well as the fact that the style can be adapted for mass appeal. The trend must be able to be accommodated in the existing price structure and have an acceptable amount of risk that will blend into the overall range. It is therefore really important that to minimise the risk that the trends have to be identified as those that have staying power and have the potential of becoming profitable and that the strategy can be adapted in order that they are in accordance with emerging trend data so as to match the customers’ needs , wants and desires.
It is important to note that trends are not necessarily continually on an increment, some explode and become relevant while others disappear. They are also not created in isolation as they are influenced by social and environmental factors which will have an effect on various industries, individuals, companies’ products and services which makes the harvesting of accurate data paramount.
An insight differs in that it comprises of accurate understanding and intuitive analysis of the person or thing that is served. In other words it is the “why”, and ‘what if” and so it therefore depends on creative thinking and analysis.
There is often confusion in the distinction as to what is a trend and that which is a fad. To distinguish between the two, a trend is a popular general direction which takes longer to build than a fad and lasts longer for which there is a bigger demand. The fad generally has a smaller demand and seldom migrates into the mainstream and characteristically generates a very high rate of interest for a very short period of time and is often just a flash in the pan. To draw a comparison belted waists for dresses may be seen as a trend for an entire season or longer but “oncies” all in one fleece garments for men were a fad that did not last very long.
It is therefore understandable that the implementation of trends, insights and fads can be considerably complex but eventually the objective through the integration of the three elements is to through being innovation and steady management to provide a nimble, agile and flexible business plans, marketing strategies, brand development, and organisational structures within a constantly changing operational environment.
Posted by Unknown at 20:27 No comments: